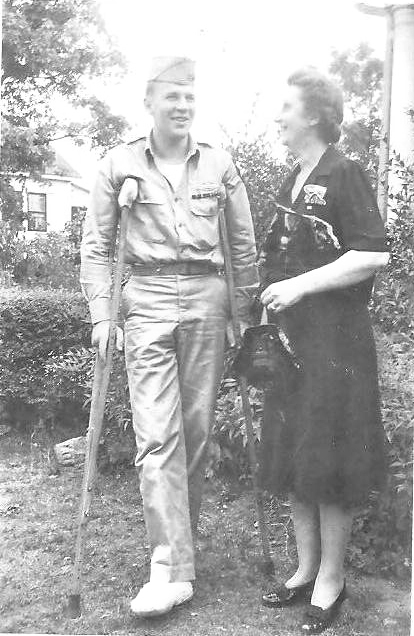 my grandfather John Bennette Cornwell and his mother

Today, on the 70th anniversary of D-Day, I can’t help but think of my grandfather, John Bennette Cornwell, and all the other soldiers who fought in World War II.  I am so very lucky to have known and loved my grandfather.  He was the biggest Clemson fan you’ve ever met!  On this important day of remembrance, I shudder when I think of the fear in the young boys minds.  Before my grandfather died, he told of his experience.  It was written down (I am so thankful).  John had nightmares of the war and never told my dad or his siblings of his stories as they were “difficult for me and for many years remained safely blocked from conscious thought.”

Here is just an excerpt from John:

“I was among many thousands of frightened soldiers who landed at Normandy on June 7, 1944 (D-Day +1) and was immediately assigned to Company B, Ninth Infantry Regiment, 2nd Division.  Where the normal officers are 6, I was the 10th.

German resistance was strong, but Allied air superiority prevailed.  By the end of June, the Allies had 850,000 troops and 150,000 vehicles ashore.  I was assigned many patrols behind enemy lines.  By my side were Life magazine writers and photographers.  You can not imagine the fear I felt as we progressed across a land streaked with hedgerows full of German snipers.  There are snipers in trees, in buildings, in piles of wreckage, in the grass.  But mainly they are in the high, bushy hedgerows that form the fences of all the Norman fields and line every roadside and lane.  If you had a strong arm, you could throw a hand grenade from one hedgerow to another.  To fire a mortar round you had to point it all but straight up.  The enemy was unbearably close. It is perfect sniping country.  A man can hide himself in the thick fence-row shrubbery with several days’ rations, and it’s like hunting a needle in a haystack to find him.  Every mile we advance there are dozens of snipers left behind us.  They pick off our soldiers one by one as they walk down the roads across the fields.  Not long after joining the Company, the Second Platoon leader was killed and I took over as commander of the Platoon, which I thought was the best.  I can remember telling one of the soldiers behind a hedgerow, who did not want to fire at the Germans, that if he did not start firing I would kill him on the spot.  He started firing.”

John also wrote letters to my grandmother for the 2 years he was fighting, we have those as well.  I love the lingo and the southern slang, I can hear him – “sho-nuff”!  John grew up in Chester, South Carolina.

I just wanted to take this moment to thank all the women and men who fight every day for our country.  The freedom we have is taken for granted so many times.  Especially with the youth.  I worry about the generations to come.  I for one am not a history buff, and history was my worst subject in school, but when I have history written on a piece of paper in front of me by my own grandfather, it sticks.  I remember it more.  For all the soldiers out there, please write it down, write your love letters, write your rankings down, write you medals down, it means so much for a family to have knowledge of these things long after you are gone.  My grandfather was 20-24 years old during WWII.  I am so thankful, I will have these important pieces of history to share with my son and tell him about his great grandfather he never met.